Ugly by Accident or Design?


"I would argue even more strenuously that yes, modernists consciously strive to produce ugly buildings. Modernism, in rejecting traditional concepts of beauty, by definition exalts traditional concepts of ugly. And ugly is as ugly does. So, yes, modernist architects purposely design ugly buildings. If they occasionally fail to carry out the principles of modern architecture and create an insufficiently unattractive building, it is accidental."

Christopher Woodward, the director of London’s Garden Museum, wrote “Why Are So Many New Buildings Ugly?” for its website. He had read British critic Stephen Bayley’s 2013 book Ugly: The Aesthetics of Everything, and describes an exchange Bayley had with architect Robert A.M. Stern:

Is ugliness a consequence of aesthetic intentions, or of the process of design and construction? More and more I think it’s the latter.

Yesterday, a commenter, Bruce MacGunnigle, alerted me to Woodward’s essay, and I went to Stern’s defense, arguing:


Bruce, I have begun to read the essay from the Garden Museum site, and I must say I have to agree with Stern. Perhaps architects don’t literally start out intending to design ugly buildings, but by dint of aesthetic principles they embrace which seek to contradict and contrast traditional ideas of beauty, they are coming about as close as you can to purposely designing ugly buildings. I will read the rest of the essay and possibly post on it, and will let you know if my opinion of what the author is saying changes.

Well, I’ve finished Woodward’s essay, and I see a sort of a flaw in my defense of Stern’s reply to Bayley. I was not tough enough on the bastards. I would argue even more strenuously that yes, modernists consciously strive to produce ugly buildings. Modernism, in rejecting traditional concepts of beauty, by definition exalts traditional concepts of ugly. And ugly is as ugly does. So, yes, modernist architects purposely design ugly buildings. If they occasionally fail to carry out the principles of modern architecture and create an insufficiently unattractive building, it is accidental.

Perhaps this seems tendentious, circular reasoning, but modernists have got to sleep in the bed they have made. They have tried to dethrone traditional aesthetics, and to a great extent they have succeeded, in that hundreds of thousands of ugly buildings have been built to the applause, over the years, of hundreds of mod-symp architecture critics (the only kind that can get jobs writing about architecture). Ugly design is almost all that is taught in schools of architecture. The very, very rich spend millions to build ugly houses, and more millions to put up ugly art on the walls. The development processes in cities and town throughout this nation and the world are rigged to give commissions to developers who will build ugly buildings. And yet while aesthetic modernists in every field of art, including architecture, have, to this very remarkable extent, succeeded in turning the world upside down, they have not changed the minds of most people. So, yes: they have failed. My defense is not circular but a reflection of basic common sense.

Regarding architecture, the people are literally smarter than the experts. To this extent, expertise, as Tom Nichols’s new book The Death of Expertise argues, is indeed dead. Nichols argues that it is being killed not by its own fatuity but by the internet, which gives people more access than ever to challenges to expertise. In the case of architecture, however, Nichols is dead wrong. The public is correct. I have argued for years that people, who all experience architecture constantly from near birth, have an innate solidity of judgment on architecture that they do not have in most other arts. The high percentage of the public that does not like modern architecture is a result of the survival – in the face of powerful cultural authority – of the individual’s intuitive (and highly intelligent) respect for beauty.

In the same way, the design and development process in cities is difficult because a developer and his architectural team must gain permits from committees whose members are generally sympathetic to modernist design but who are appointed by politicians who depend on the votes of a public that dislikes modern architecture. Thus, these panel members must dissemble – as I have heard them do time and again – in their recommendations to developers, pushing modernist design changes without making it too obvious that they are doing so. That causes confusion, misinterpretation of such recommendations, and more time spent at the drawing board and returning to the panel to seek approval of revised plans, again and again.

Woodward may understand this now that he has led his museum through a year’s closure for renovations. The difficulties caused by design and construction are not the cause of ugliness but the result of what happens when the system’s preference for ugliness grinds up against the public’s preference for beauty.

If developers would embrace the public’s idea of beauty – and accept its preference for traditional architecture – there would be more simplicity in the process of development, fewer cost overruns, less frustration, and more beauty in the urban environment.

I’ve gotten off track, but the pursuit of ugliness, whether intentional or not, causes disruption in the function of the economy all the way down the line. I’m not sure that Woodward, Bayley, Nichols or even Stern would agree – though I’d hope that Stern would see the logic of the proposition. Anyhow, that’s why so many new buildings are ugly. 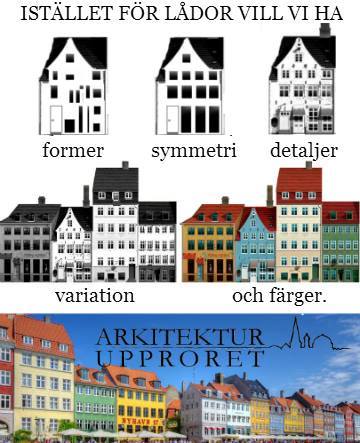 Posted by Øyvind Holmstad at 07:26

Email ThisBlogThis!Share to TwitterShare to FacebookShare to Pinterest
Labels: Arkitektur/(Bio)-Urbanisme/Natursamfunn, Articles in English

A Visit to Dyssekilde EcoVillage - Denmark 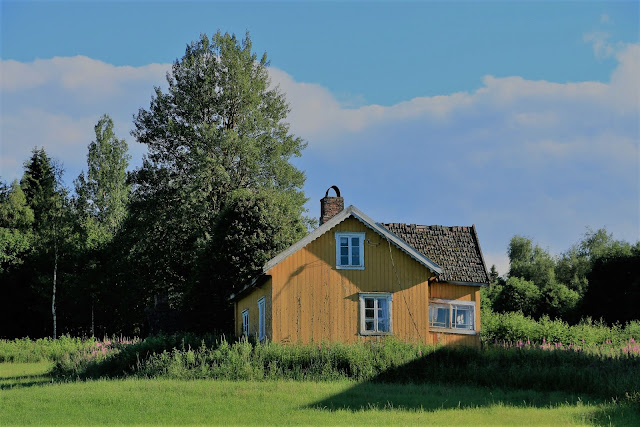 A Lost Opportunity for Skreia

A Lost Opportunity for Skreia (A letter to Ross Chapin)

Real bio-urbanism for our future!

In any environment we build—building, room, garden, neighborhood—always, what matters most of all is that each part of this environment intensifies life. We mean that it intensifies human life, animal life, emotional life, the life of storms, the life of wild grasses and lilies, the life of fish in a stream, the life of human kindness in a rough place where it may not be easy to find. – Christopher Alexander

IF ONE THING, MORE THAN ANY OTHER, distinguishes a real neighborhood from the corporate machine-architecture of the 20th-century developer, it is the fact that real people have — together — conceived it, planned it, and built it. It is this human reality which makes it worth living in, pleasant to be there, and valuable. – Christopher Alexander
This is, of course, a rampant nod to commercialism, which, if we did not live in such a commercial era, would be seen for what it is. The life of a community cannot be held hostage, by a person or corporation who seeks to make money and profit from the construction of its streets and buildings. The streets and buildings are part of the neighborhood’s lifeblood, the city’s life blood, and they must be interwoven with the activities and life of the people themselves. Anything less leads inevitably to drug abuse, crime, teenage violence, anomie, and despair – the very earmarks of modern urbanism. – Christopher Alexander
Here we can see the radical nature of Berry’s vision. Our entire economy, our very culture of work, leisure, and home is constructed around the idea of easy mobility and the disintegration of various aspects of our lives. We live in one place, work in another, shop in another, worship in another, and take our leisure somewhere else. According to Berry, an integrated life, a life of integrity, is one characterized by membership in a community in which one lives, works, worships, and conducts the vast majority of other human activities. The choice is stark: “If we do not live where we work, and when we work, we are wasting our lives, and our work too.” – Wendell Berry
The practical result of government promotion of monoculture development is that for most of us there are two communities: a community in which we work and shop, and a bedroom community in which we are stored. – Kevin Carson
Et lommenabolag er en helhet, ikke et despotisk eiendomsrettshelvete etter modell av den britiske lovteoretikeren William Blackstone. – Naturkonservativ